I didn’t feel the loss the day I saw him last. Just thought I will see him again.

I’m talking about my first friend, my first love of sorts, the one I lost: Babuji.

The memory of when and how he came into my life is lost , just as he is. He was just there in my life, an everyday part of it. We were inseparable.

I recall my mother watching us with trepidation…. on my obsessive servitude to him and his undivided attention to me.I’m sure she plotted then to separate us soon, waiting for the right time. Her resolve must have strengthened when I declared that Babuji and I will bathe together going forward, the rest of our lives. There was a severe water shortage, I learnt later, and she was not going to let precious water be wasted on a rubber toy. That’s what Babuji was to her….a rubber teddy bear that used to squeak from a little device when pressed until that was lost…Even Babuji had experienced loss!

But we all know that Babuji was more than a rubbery compound moulded together into a shape of an cute animal like creature and painted with toxic lead paint with no apparent indications of gender . He is in the same league as Santa, Mickey mouse, Donald (not Trump but Duck) and magic school bus. 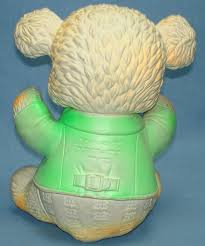 Why I declared him a male, I would never know. He was He…just like we call God “He”. I would also never know why I named him ‘Babuji’.”Where did she get that name”, my parents asked themselves aloud. Maybe I heard it somewhere…may be it was part of some Karmic memory…maybe the wind whispered me the name…Baaaaabuuuuujiiiii.

I wonder where he lies now. Its been almost 30 years. His inorganic body must have been disintegrated by the elements and seeped into the earth, into the water causing algae to die, sea levels to rise.

Maybe he is still intact somewhere staring at a little girl with the same love in his eyes that he had for me. You see , for all his cuteness and his loving eyes he was fickle…he looked at all of us girls the same. Seeing him in the arms of another girl, who didn’t love him as much as I did, who wasn’t as devoted as me, who didn’t bathe him everyday and cuddle with him every night, broke the magic between us. He may have been my first love but a girl wants to be the only one. That special look of love , reserved only for her.

Still, I shouldn’t have said ‘Yes’ when I wanted to say ‘No’. There’s  no excuse for what I did.

Like Loading...
This entry was posted in Story, Writing101 and tagged loss, short story, writing101. Bookmark the permalink.